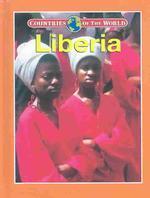 From the Publisher
Liberia was a colony for freed and freeborn African Americans for twenty-five years before becoming the first republic on the African continent in 1847. Today, Liberia is recovering from over twenty years of violence, which include seven years of civil war (1989-1996). From depleted iron ore mines to enviable diamond reserves, from indiscriminate logging to the world's largest rubber plantation, from the shrieking pepper bird to the docile pygmy hippopotamus, this book is a spirited investigation of the sharp contrasts that define the Liberian land and its people.

From the Critics--Children’s Literature
Students will read about the diamond and mining controversies and how the United States is linked to the formation of this West African nation. In addition to the book's captivating photographs, students will be able to quickly access information within the table of contents, index and glossary along with finding additional information through suggested Web sites, books and videos.

A Closer Look at Liberia
For much of the nineteenth century, the American Colonization Society helped thousands of freed African American slaves immigrate from the United States to Liberia. The new immigrants, or Americo-Liberians, formed the Republic of Liberia in 1847 and began to blend with the variety of indigenous cultures in the region. Today, Liberia is struggling to keep peace at home and with its neighbors and to manage its resources, which offer economic opportunities. Liberia’s natural resources do not end with valuable commodities. The country is also home to a remarkably rich bird life; the pygmy hippopotamus, a vulnerable species; and untouched ancient forests. Joseph Jenkins Roberts and William Tubman, Liberia’s first and seventeenth presidents respectively, made valuable contributions to the nation and have indelibly marked the country’s history. Traditional indigenous Liberian cultures, including the Vai, Bassa, Kpelle, and Dan, are gaining new interest and respect in Liberia and around the world. Liberia’s rich storytelling traditions include many colorful folktales, which have since been retold and preserved in modern-day books such as Head, Body, Legs and Mrs. Chicken and the Hungry Crocodile.