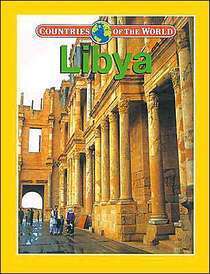 From the Critics--Children's Literature
This title in the "Countries of the World" series conveys a balanced and diplomatic view of Libya, a country identified with terrorism and hostility toward other countries. It is a country situated at the crossroads of Africa, Europe and the Middle East with a vast history. Presented in encyclopedic fashion with a generous array of color photographs, the brief chapters and succinct paragraphs make this a practical choice to learn about this controversial country. One distraction to note is the use of references to "a closer look" peppered throughout the text. These are a couple of sentences in bold text offering further explanation of a particular topic. They seem to appear on pages of no relevance and require readers to turn to another area of the book. This seems unnecessary and a poor use of page layout. Aside from that "flaw," this is an excellent source for a broad overview of a country. From festivals, food and music--to political and economic relations with the United States and Canada, post 2001. There is a helpful glossary as well as references for further study.

Under the Ottomans and Qaramanlis

In 1551, present-day Libya came under the control of the Ottoman Empire in Turkey. The Ottomans established the region as a province and ruled it from Tripoli. The official in charge of the province, called a bey (BAY), was chosen from the influential tribes of Tripoli to rule as a governor and collect taxes on behalf of the Ottoman Empire. The region continued to prosper from the trans-Saharan trade that took place within its borders. Turkish soldiers stationed in the province also married local women.

In 1171, the province's bey, Ahmad Qaramanli, took control of the province from the Ottomans. He took the title of pasha, and his family ruled until 1835. During this time, European powers, such as Great Britain and France, began fighting for control of the Mediterranean Sea. Pirates also patrolled the North African coast and attacked trade and military ships. Piracy along the North African coast ended in the first half of the nineteenth century when the French and British navies fought the pirates. The Ottomans regained control of the region in 1835 but encountered resistance from the Sanusiyah, and Islamic group founded in Cyrenaica in 1837. Ottoman rule came to an end in 1911, when present-day Libya was invaded by Italy during World War I.